Brush strippers were developed to overcome problems in harvesting light, difficult-to-handle, chaffy seed. In 1981, Aaron Beisel developed the Woodward Flail-Vac Seed Stripper (U.S. Patent No. 4,373,322) to harvest mainly bluestem species (Bothriochloa spp.). His hypothesis was that a brush that rotated upward at the leading edge would result in less stem breakage and thus a cleaner product than would be possible from a brush that rotated downward. In addition, the air flow produced by the shroud-covered brush would gather seed heads into the flailing brush and carry the stripped seed to the seed hopper. The unit has become the standard for harvesting numerous grass species in the United States, Australia, and other countries. Stripper units attach to the front-end loader frame on a tractor and are available in 4- to 12-foot widths, 12 foot being the most common. Trailer models and hand carried units are also available. Strippers are well suited for use on commercial grass-seed farms as well as small acreages and research plots because they are simple and very cost effective. They are not suited for rocky or rugged terrain. 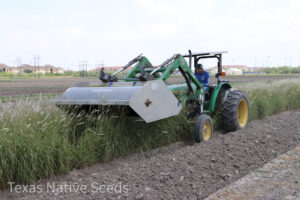 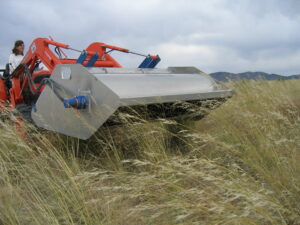 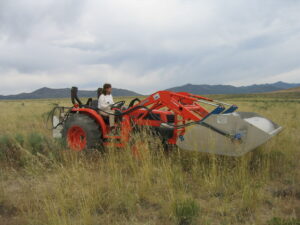