Understanding tractor power and pulling capacity is essential when selecting appropriate equipment for an operation. A general explanation of how a tractor utilizes engine horsepower and torque is outlined in this section.

Manufacturers specify the power output of their tractors and the ratings are usually certified by an independent laboratory. Tractors manufactured in the United States are tested at the Nebraska Tractor Test Laboratory. The tests results are online and provide information on maximum horsepower, pulling capacities at different speeds, and fuel efficiencies.

Horsepower is the rate of doing work. Work is moving a weight over a distance. Early power measurements were derived by a horse moving a weight over a distance in a given time, thus horsepower. It was defined as 33,000 foot-pounds per minute. Torque is the force that causes a twisting effort in a rotating shaft such as a tractor axle and wheels or a power-take-off (PTO) shaft. PTO horsepower is determined by the amount of torque in foot-pounds of force (ft-lbf) and shaft speed in revolutions per minute (rpm). The term “power,” a more universally accepted term today, is used in the remaining discussion rather than horsepower. Key terms used in describing tractor operation are in italics.

Figure 1 shows the power and torque curves as a function of engine speed for a typical tractor engine. The maximum engine power is developed at the rated speed of 2200 rpm. High-idle speed of 2400 rpm is the engine speed at full throttle with the transmission in park. As a load is applied to the engine (tractor plowing), engine speed decreases and the governor continues to open until it is fully open at 2200 rpm. At this point the engine is developing maximum power (maximum acres per hour). Governor action of 200 rpm is common. Increasing the load reduces the engine speed and power. Torque, however, is increasing as speed is decreasing until 1400 rpm. This increase in torque is called torque rise. The torque rise is what provides a tractor’s lugging ability; the ability to increase drawbar pull to overcome hard spots in a field without stopping. Lugging the engine is acceptable if it is not too severe or occurs too frequently. If tractor engine overheating occurs, a lower gear should be used. 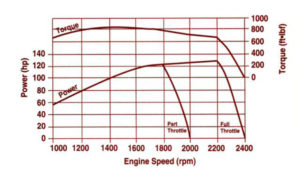